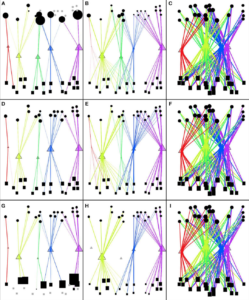 Seasonal migrations are some of the most spectacular and fascinating phenomena found in nature and occur in many taxa, including insects, fish, reptiles, mammals, and birds. Migratory animals comprise a significant portion of global biodiversity and are fundamental components of ecosystems worldwide, but they present a challenge for conservation since their life cycles rely upon a suite of habitats that often span geographical, ecological and political boundaries. Despite decades of research, we do not understand the many factors that affect migratory species.

In my lab, we are developing ecological theory under  the framework of Migratory Networks. A migratory network consists of nodes representing habitat regions and edges that represent  the regular, seasonal movements. As well as theoretical explorations, we are applying network models to Semipalmated Sandpipers, Monarch Butterflies, Wilson’s Warblers and Wood Thrushes. Construction of networks often requires tracking of individuals using either intrinsic or extrinsic markers and we have worked on an international collaboration  to develop best practice analysis techniques for one of these extrinsic markers, geolocators.  Another international collaboration in which we used geolocators and radar data, has resulted in the application of the network  framework to  Tree Swallows.

A recent development is an upcoming article in which we develop a genoscape-network for Wilson’s Warblers. In this work, the delineation of the network nodes in the breeding season and connectivity between seasons is defined by a spatial analysis of  intrinsic genetic markers.

A large part of the work on Migratory Networks was funded by a Complex Systems Scholar Award from the James S. McDonnell Foundation.