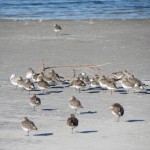 Migratory shorebirds are of high conservation concern as many shorebird populations are declining and their habitat is vulnerable to human disturbance, sea level rise and other effects of climate change. Predicting the impacts of future environmental change on these populations requires an understanding of how the habitats used by shorebirds on migration and during the winter affect annual fitness and survival. However, despite the importance of its habitats to migratory shorebirds, stopover sites along the northern Gulf of Mexico and wintering sites in South America has not been well studied. We are working to better understand how shorebirds use northern Gulf of Mexico and South American habitats. 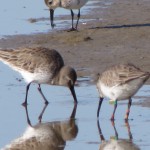 The wetlands of the northern Gulf of Mexico are important habitats for 34 species of shorebirds. Of these, 6 species are considered resident and 28 are migratory species that spend all or part of their non-breeding seasons on the Gulf coast. For many of these migratory species, the wetlands and barrier islands of the Gulf coast represent the first areas of suitable wintering or stopover habitat between near-arctic breeding grounds and distant wintering grounds in South America. Our previous research combined measures of toxicological status of birds, their prey, and their habitats with measures of within-season and inter-annual fitness to examine the near and long-term impacts of the Deepwater Horizon oil spill, which directly impacted over 600 miles of coastline. Our current research is to further the understanding of migratory ecology among shorebirds in the northern Gulf of Mexico to look at habitat use, length of stay and body condition.

Much is still unknown in the annual cycle of migratory shorebirds and a large gap of knowledge exists for the winter survival in South America. Declines of semipalmated sandpipers have been documented in its breeding and certain stopover habitats. In collaboration with David Mizrahi, New Jersey Audubon, we are expanding our shorebird research to include the winter survival of semipalmated sandpipers in Suriname, French Guiana and Brazil. We aim to investigate the possibility of population declines due to winter survival in South America and contribute in addressing the data gaps in the winter stage of their annual cycle.