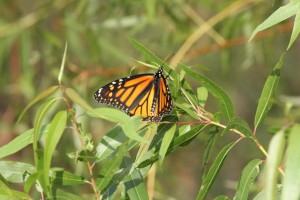 We are studying the movement and population dynamics of monarch butterflies. As changes in resource and habitat availability change, many migratory species have declined in abundance or altered their migratory behavior. Understanding the root causes of these changes and how they influence migratory populations is challenging, in part because changes to abundance in one location could be buffered by spatial connectivity, and because it is not always clear how changes at one point in the migratory cycle are connected to dynamics at later stages. Modeling studies predict migratory population decline with habitat loss, and yet many migratory populations show significant inter-annual fluctuations even at low densities. Potential drivers of these fluctuations include interactions with natural enemies, such as predators, parasitoids, and pathogens. 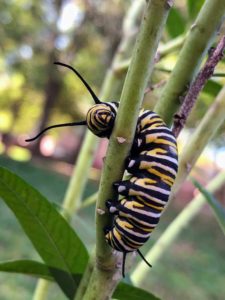 Monarch butterflies serve as an ideal model species to investigate the role of habitat alterations and predators and pathogens in the population dynamics and fluctuations of migratory species because they have been extensively monitored throughout their annual migratory cycle, with over 25 monitoring data sets spanning 5-40 years. While counts of monarchs at overwintering sites are declining, some monarchs are becoming more sedentary, foregoing migration to Mexico and instead remaining in the southern U.S. to breed throughout the winter. This sedentary behavior has increased in recent years and may be related to human planting of exotic milkweed. With collaborators at UGA, USGS, and University of Wisconsin, our goal is to understand how the winter-breeding of monarchs in the southern US might be impacted predation or disease transmission and what role this segment of the population plays in the long-term survival of the species. This information will then be used to inform the creation of models designed to interpret not only the impacts of habitat change on the species, but also the impact of disease dynamics. Our monarch project has a strong local and Urban Ecology component as we examine how planting of milkweed in New Orleans and nearby influences the phenology and behavior of monarch butterflies. Undergraduate students interested in participating on the monarch project should contact Caz Taylor or graduate student, Christen Steele, to find out about opportunities.

Lab members involved in this project: