During the non-breeding season, Tree Swallows form huge nightly roosts, often containing thousands to millions of individuals, in wetland reed beds. In southeastern Louisiana, however, roost form in the same sugar cane fields year after year. These fields are harvested shortly after their arrival, and the birds are forced to relocate their roosts. Using geolocators and weather radar, we tested the hypothesis that swallows breeding in Midwestern North America are using cane fields in Louisiana as stopover habitat before continuing their migration to as yet unknown areas ad compared the annual frost dynamics in Louisiana to those in Florida.

We also studied the dynamics between roosts. A radio telemetry study in the winter of 2010-11 revealed that there is significant movement by individuals between the roosts that form in sugar cane fields. This indicates that these roosts belong to a network, a roost system used by many millions of Tree Swallows each year until the harvest is complete.

Spatial Ecology of Blue Crabs in the Gulf of Mexico 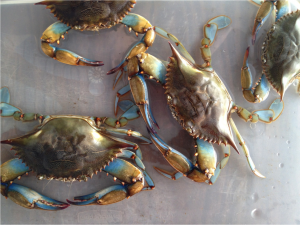